An Evening of Music

On Saturday 28 July 2014, a concert took place at St John’s Hall in Bath, featuring varied music from the repertoire and my own compositions. It was a chance to give the first live run through for several of the pieces and understand how the audience would react to the music. It turned out to be a joyous and moving occasion that I will cherish in my memory for some time to come.

As a piano teacher in Bath, I regularly organise student recitals with fellow piano teacher Susanna Downes. The Piano Shop Bath was very kind in sponsoring the event, by providing a Yamaha C7 piano for the student recital. You can read more about the student recital on my teaching website blog. The piano would not be moved until the following Monday, so we were presented with an unmissable opportunity of having a fantastic piano and a venue available for something.

And so Susanna organized a concert for the day after the student recital. This would feature Susanna and I playing the piano, with great musicians joining us for the evening: Jon Stabler on Cello and Jennie Mason-Smith on Flute. The concert featured inspiring music from Mozart, Mendelsohn and Perilhou, to Oscar Peterson and The Piano Guys. The program had been well arranged by Susanna, with variations in character and colour that clearly moved the audience (some to tears!). Highlights included fiendishly difficult flute playing from Jennie on ‘Ballade’ by Perilhou, while the finale of ‘Going Home’ by The Piano Guys, with Jon on Cello and Susanna on piano, was a fitting end to what had been a great evening of music. 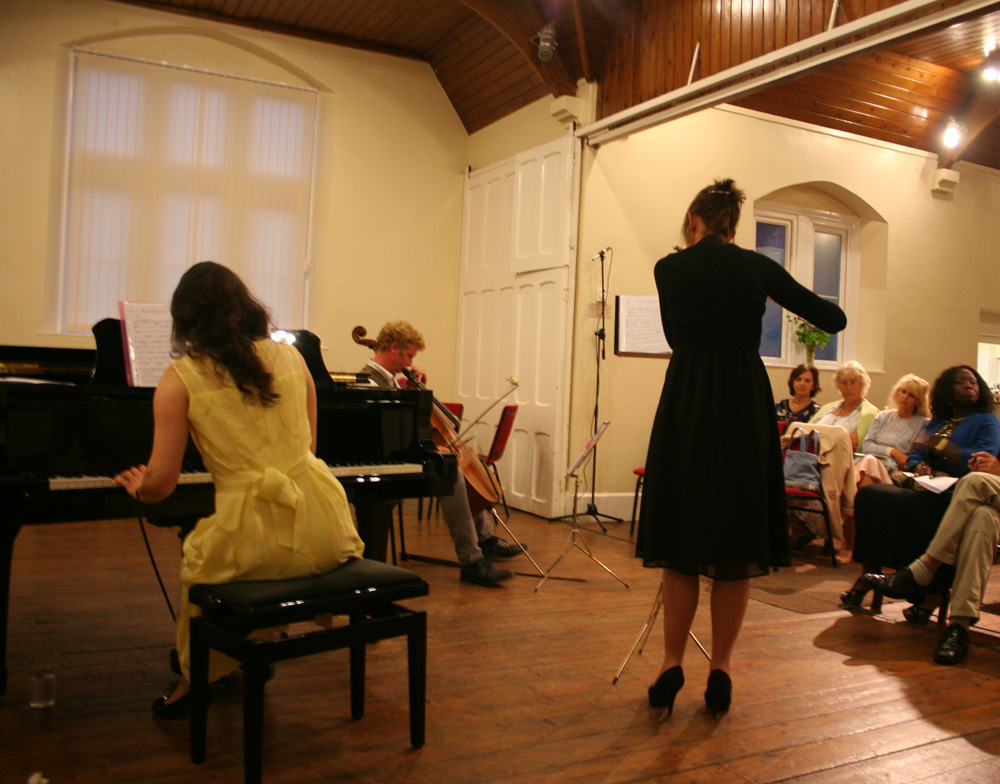 From left to right: Susanna Downes, Jon Stabler and Jennie Mason-Smith, performing at the concert at St John’s, Bath

It was also a chance to perform some of the works I have composed. This music had been written primarily for a trio that includes Jon Stabler on Cello, Susanna Downes on Flute, and myself on piano. There is a very specific function of writing for a small ensemble rather than a huge orchestra. Firstly, until I get that commission from the Royal Philharmonic, I am unlikely to have any of my music performed if it is scored for a huge orchestra. There is neither the finances nor the resources. So from a practical perspective, I got together with Jon and Susanna to have a working vehicle for my music, which incidentally is very portable and can be taken all kinds of venues.

Secondly, the kind of music you write for a small trio can be very exciting to compose and perform. As a composer, you have to make every musical phrase count, to draw out the biggest effect from a relatively small tonal palate. Luckily, the piano, cello and flute are some of the most expressive instruments available in the classical arsenal.

It was a very proud moment to perform these pieces, to be part of a working music ensemble, and to hear the rewards of late night rehearsals. When performing with an ensemble, you start to realize the connection you have with your fellow performers. Hearing Jon and Susanna apply all their musicianship to these little pieces I had written was a very touching and proud moment for me.

For the audience, it seemed it was also quite moving to watch. Some of the feedback we got paid compliment to the setting: the audience were exceptionally close to the performers, and could see all the interaction and happy glances we gave each other when a section of the music went well. We had arranged the hall in a more informal manner, with wine before, during and after the concert! This, in addition with spoken introductions from our cellist Jon Stabler, who doubled up as compere, gave the evening an easy atmosphere. It was much more relaxing to perform and this made it easier to enjoy the moments, for musicians and audience alike. This is somewhat of a similar template to what the Orchestra of the Age of Enlightenment did with their ‘Up Late’ series of concerts, which I saw a few years back. I believe that the format and presentation in this style, is a small stepping stone towards making classical music relevant to more people than just the core audience.

My compositions were recorded live and you can hear the results for yourself here. There was a very pleasing pause, followed by an in take of air  and then applause from the audience after certain compositions came to an end, most notably on ‘Largo’. This was something which you do not expect when you write the pieces and it was a light bulb moment for me as a composer, to experience the effect that new music can have on people.

There were also moments to savour the initial fruits of a collaboration with writer James Roy Blair Anderson. After previous success with ‘Dust’, performed back in March, I had written two types of pieces to his words. ‘Sunset Fan/Flood’ is a musical depiction of the words of two poems entitled ‘Sunset Fan‘ and ‘Sunset Flood‘. This piece has really come into its own as the trio has performed and rehearsed it more and more.

There was also a chance to perform the aria ‘Ancienne Romance‘, set to a poem of the same name by James Roy Blair Anderson. Yes, I am singing in the concert recording, but I eagerly anticipate the opportunity to have the piece recorded by a professional trained singer! Again, you make do with the resources you have to hand, and having sung for years in various guises, I am happy with my abilities to convey the emotions required in this piece. It has become a favourite with the trio, and the bitter sweet message of the words always strikes a chord with the audience.

I fully look forward to the next concert opportunity. There is a potential high quality recording in the pipeline of these compositions, and we are now looking to organise further recitals which will continue sharing this music in a setting that is relaxed for both the audience and the musicians. If you would like more information about the music or would like to book the trio, please get in touch here.