For a while now I have been fascinated with the Hohner Clavinet, an electro mechanical keyboard that was designed by Ernst Zacharius and first produced in 1964. The mechanism is a simple design where a harp of steel strings is set under a keybed; under each key is a hammer with a rubber tip and this hits the string when pushed down. Under each string is an anvil, so effectively the string is being fretted as it is squeezed between the anvil and the rubber hammer tip. The harp alone has no soundboard, so the strings are extremely quiet. The inventive part was to put single coil pickups underneath and on top of the strings so it could be amplified. When you hear it and see it, you realise that there are more similarities to the electric guitar that a keyboard instrument! In fact to this day I still hear people in conversation mistakenly describe the opening of Superstition by the great Stevie Wonder as a guitar. It is in fact the Clavinet and to this day Stevie Wonder is one of the greatest exponents of the instrument.

As a composer I like to espouse the benefits of unamplified music and the different way in which it hits your ears, as opposed to amplified music. I think musical performances take on a different atmosphere when the instruments are unamplified; dynamic variation is much greater and this has an affect on how the audience participates. Having done open mics in the past, I’ve always wondered why the sound technician sets up a huge PA for a tiny room that only fits 20 people! I am not against amplified music at all, in fact there are many forms of music which simply could not operate without amplification. I just would like to see more attempts at performing music outside of classical music in an unamplified context.

So why am I writing an article about an amplified instrument and why have a now acquired an example of the most famous model, the Clavinet D6?! Well, I came to it in a roundabout way through trying to explore smaller and lighter keyboard instruments. I was curious about alternatives to the piano; as a pianist you are at the mercy of what is put in front of you unless you have the budget to choose your own instrument. If you put on your own concerts frequently, a quick pop performance means you have to go down the road of a digital piano. I have a top end stage piano, but it still really lacks a lot of the subtleties of touch and tone that you get on an acoustic piano, so compromises have to be made.

I started to look into older predecessors of the piano that are more lightweight, but each presented its own challenge. The Harpsichord is a wonderful instrument but really involves a completely different touch technique from modern piano technique, while the sound is also simply a harpsichord sound, ubiquitous and limiting in some aspects of composition that requires a range of dynamics. My preferred option, the Fortepiano, was simply to expensive as they are all handmade and in much less demand that harpsichords. It is a beautiful instrument that has dynamic and timbral variation, and I may yet explore this instrument further in future. The Square Piano, a relative of the fortepiano, represented a possibility, but restoration costs are usually considerable. All of these examples would also have required a van to transport and are not really designed for frequent road travel.

This left me with the Clavichord. An instrument that dates to the early Medieval period, the Clavichord presented the best possible choice for a transportable unamplified instrument. In fact, it was said that Mozart would carry his travel Clavichord under his arm as he travelled between towns! The Clavichord has dynamic variation and even pitch bending possibilities, as you can keep your finger on the key once pressed and wiggle it to bend the pitch. However, this wonderful instrument is now too quiet! Its size means that the soundboard is simply not large enough to project beyond a small living room. Legend has it that Handel hid one in the attic from his father, who wanted him to study law rather than music, and during those long nights Handel practised away with his father being none the wiser on the floors below.

Here is an excellent video in two parts delivered by David Schrader, which shows most of the keyboard instruments mentioned here.

I saw a similar thread on a forum online, with someone mentioning the Clavinet as an alternative to the Clavichord. They are in fact two completely different instruments in terms of the mechanical action and the Clavichord is actually much louder, as the Clavinet simply has no means for amplification when not plugged in. But the idea had been put in my mind and I started to realise that perhaps the modern piano, by its design and the string tension involved, will always be a heavy instrument that requires planning for when putting on a music performance.

The Clavinet also has an unlikely Classical music heritage that was never explored in a widespread way and this intrigued me. Its designer Ernst Zacharius had initially come at its design from a classical music background. The 1960s was seeing a revival of baroque music interest and historical performance practise, meaning use of historical keyboard instruments rather than pianos. These instruments all had the aforementioned issues with projection in a large space, so the Clavinet would fulfil the needs of these type of performances. The first demos of the Clavinet were of performances of Bach and Mozart, but the instrument was apparently roundly rejected by classical musicians. In a way I can understand this, as simply being an amplified instrument is counter- intuitive to everything that historic performance practise is about. The sound of the Clavinet is also very different from a Harpsichord or a Clavichord. Ernst Zacharius basically invented a new instrument with a new tonal soundscape.

It is this new tonal soundscape that has intrigued me and it is easy to understand why musicians from various strands of pop music took to it. It could hold its weight against a full amplified band, it has percussive qualities that can work with rhythm sections and its unique sound gave a new set of colours for bands that were trying to create new sounds. Today people readily associate the sound with Stevie Wonder and more widely funk music, but in the late 1960s and early 1970s, it was definitely a new unexplored sound.

During a recent trip to Germany I had the pleasure of exploring the Musikinstrumenten-Museum in Berlin, a large collection of over 800 instruments from Renaissance to present day. A great many of these instruments are keyboard instruments and our excellent guide gave us great insight into the development of keyboard instruments over the centuries. It is hard to imagine a world where there were several keyboard instruments available to musicians; today when we talk boy acoustic keyboard instruments we are talking exclusively about pianos, but back then they had Clavichords, Organs, Harpsichords and Fortepianos! Each presented pros and cons and it was up to the performer to decide which best suited their playing.

The Musikinstrumenten-Museum were also running a fascinating exhibition entitled Good Vibrations, which took a look at the development of electronic instruments over the last 100 years. There were plenty of demo instruments to have a go on, including the ever wonderful Theremin! However, by sheer coincidence, the first instrument that I saw on display was a vintage Clavinet L! This was an early domestic model that was released in 1968 and clearly designed for the domestic market. Apart from looking like a piece of retro 1960’s furniture, it is also one of the few Clavinet models that featured an internal speaker. Although it was a display model only, I took plenty of pictures to document this wonderful version of the Clavinet. 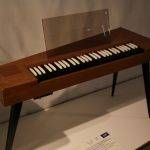 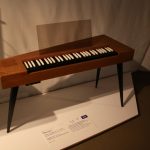 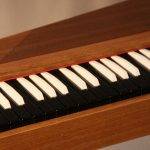 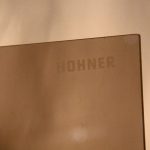 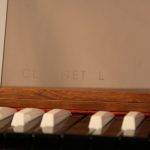 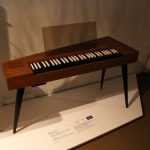 The neatest and most obvious feature are the reverse coloured keys, with black keys for the naturals and white keys for the sharps and flats. This must have been a very deliberate nod to historic baroque instruments, which nearly always had this layout for the colour of the keys. Maybe it was also to drive the appeal for classical musicians, amateur or professional, as something that could be used for a serious studying instrument.

I am currently in the process of restoring my Clavinet D6 and once complete I will be releasing a blog which documents the process. There will also be new music written for the instrument, news of which will be released on my site when ready. Finally, I am on the look-out for a Clavinet L as well, as I can already picture some interesting live shows with that instrument as a centerpiece. If you have an example of this model please do get in touch, as I think this may be just the start of a long and fruitful musical journey…..

I would like to acknowledge this excellent article found in Sound on Sound magazine from last year which helped to fill in some of the blanks for my blog; it has much more technical and historical information which I simply did not have time to list here!